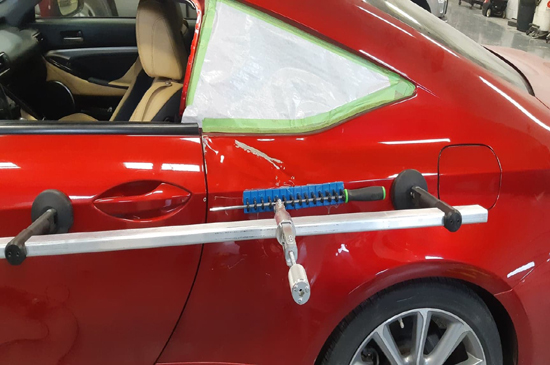 I seen a comment recently that this repair was skinned. Meaning the panel was replaced. NO ! Not correct. This car started out in a local bodyshop and waited for weeks to have the rear quarter panel cut out and replaced. But problem was there was no new quarter panel available. So when i visited the shop and took a look at it my first response was I can pull this out.

This job took a total of 3 hours plus return visits to see how the final process was going and i really wanted to see inside that rear quarter to know what was behind, example crash bracing and if anything damaged after my final repair. I did get the interior trim off a week later and had a visual inside. It's wide open after the B pillar and i could see everything with just a small piece of sound proofing in the center. No damages to anything and the glue pulling repair was a huge success.

To get this damage back to factory was a process of pulling forward on the quarter and out. This is where CamAuto Pro tools came into play and would not of happen without CamAuto Bar Tabs. It took 4 Bar Tabs with 6000 ft lbs of force forward to start the move. The quarter had to come forward enough to close up the door gap which you can see in the first image. Then at the same time I had to pull with CamAuto light puller attached to 15 large tabs under the bodyline.

It was a combination of pulling forward with the 4 Bar Tabs and pulling out with 15 Camauto large tabs using the 4 foot light puller in the second image. Releasing the crown that looked like a huge wave and pulling. After everything was back into place and the door gap closed then it was a process of reshaping the bodyline back to 100% as it is not straight nor flat and has a oval contour.

Once I was happy with the reshaping of the quarter final glue pulls were done for minor lows and then it was off to the bodyman for final painting preparations. Images below of the process and last I seen the car it was being sanded and headed into the paint booth. This was I think the largest of any dent removal to date Glue Pulled by myself and very happy with overall results, performance of CamAuto Pro tools and glue. Also Cam Auto Heat Protection Gel was used as heating the panel during pulls was a key factor to this coming back 100%