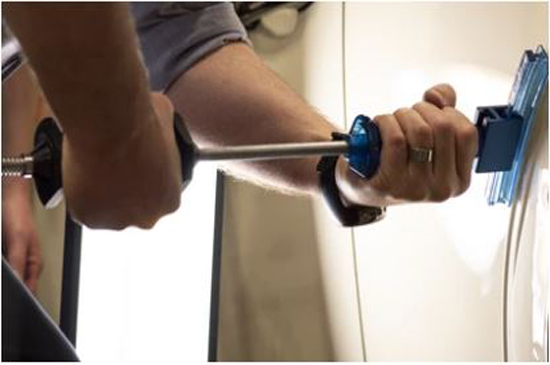 Auto makers have experimented with various manufacturing materials over the years. Steel, iron, composites, plastic, aluminum, and even wood have been the materials of choice. In the early 1940s, Henry Ford even produced a car body made completely of soy; other manufacturers have been using plastics and composites for some time not only for door panels but bumpers and fenders as well. Remember the salespeople at Saturn dealerships demonstrating the toughness of their cars’ plastic body panels by jamming a shopping cart into a door or kicking the panel, resulting in no damage?

Today aluminum is getting most of the press, for a number of reasons. Car makers use it in doors, hoods, trunks – even in complete vehicle structures. According to the Aluminum Association, aluminum has the strength of steel but has only 50% of the weight. Obviously, this indicates big savings in energy efficiency, which for vehicles means more miles per gallon of gas or diesel. As an added benefit, people recycle 90% of the aluminum in a vehicle at the end of its life.

Technicians use stud welding for panel repair in most body shops. This means welding aluminum studs into the panel, attaching a pull tool to the studs, and pulling the dent out from the front. Stud welding does not always involve removing the panel, but it still requires substantial pounding, filling, sculpting, and finishing work.

Anyone who has ever stud welded to repair a dent can tell you it can present problems. Aluminum studs often pop off during the pull, which means you may have to re-weld or try to make the pull with the remaining studs, perhaps inviting more damage if that doesn’t work. In addition, when removing the studs after the pull, you can easily tear holes in the metal, creating even more repair time. When you are finally done with your pull, you have to remove the studs, skim coat, and finish the area.

With glue pull repair (GPR), you attach a plastic piece, called a tab, to the damaged area. The tab covers much more surface area than a stud so you have more area of the dent to pull with. This allows you to apply more pulling power without fear of additional damage to the panel in the form of holes. In addition, because you do no stud welding, you do not violate the surface of the panel or anything on the backside.

GPR provides an efficient, clean way to pull the dent. With its tab-and-adhesive method of pulling, after the adhesive is set, you attach your pull tool to the tab and pull the dent out. Once you’ve pulled the dent, you simply remove the adhesive with a spray of isopropyl alcohol, do some minor knock down work, skim coat and finishing, and you’re through. No studs breaking off and no additional holes to fill as a result.

Use Your Own Tools

Glue pulling is a straight swap for stud welding or wiggle wire setups where you utilize the pulling techniques and tools that they already have. Our adaptors, tabs, and glue are extremely cost effective compared to purchasing aluminum-specific tools and components. We offer adapters so that you can continue to use the bridges and fulcrum bars you already have in your tool box. You can enter the aluminum body repair business tomorrow and be on your way to increased revenue and improved shop efficiency with GPR.

GPR began in the early 2000s. But the adhesives and tabs back then were weak so they broke often, and tool systems were not readily available. As a result, select technicians only used the “magic” of GPR on lighter pulls and to accent body shop work on large pulls. Since those early years, KECO has been at the forefront of improving these techniques and tools and has taken them to a level that allows body shops to adopt them with ease.

You can shop the entire assortment of KECO Body Repair Products as well as many of the other premier brands in dent repair at www.kecotabs.com. To see products in-use with the power of GPR, KECO’s YouTube channel is updated all the time with new videos.