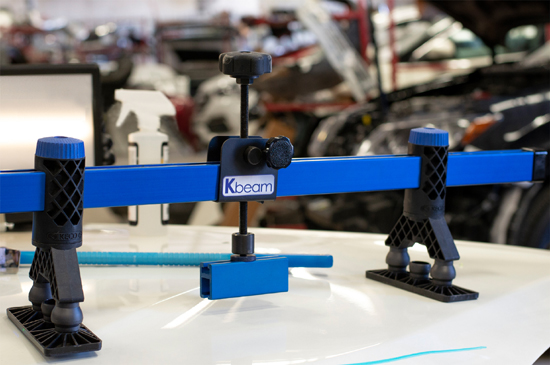 What Is Glue Pull Repair?

Modern glue pull repair (GPR) first appeared around 1999 when technicians working at a German company called Würth introduced some of the first commercially viable glue-pulling tools. Prior to this, backyard mechanics experimented with glue pulling, but the tools and techniques they developed were not available to the public.

Würth began releasing its tools in the United States in the early 2000s. Early GPR technology was a poor match for today’s advanced techniques—adhesives and tabs were weak so they often broke while tool systems were not readily available. GPR itself was not well known; the processes and procedural techniques that allowed techs to achieve really strong adhesion to pull large damaged areas were not available. Some specialty paintless dent repair (PDR) techs used what was considered the “magic” of GPR on lighter pulls and to accent body shop work on large pulls. But in general, technicians did not have what they needed—the know-how, the adhesives and pull tools—to get serious about using GPR in the body shop.

Except for contracting out certain jobs for which PDR is preferred, collision repair shop technicians don’t have a burning need to learn or use PDR. But body shop techs can use GPR to achieve improved results. Initially, techs developed GPR as an aspect of PDR, but today’s GPR is much improved and, as a result, positively enhances collision shop work.

GPR is similar to PDR in that one of the main objectives is to have as much of the original finish remain so at the end, there’s little or no filling, priming, and painting to do. Like PDR, there’s no stud welding when you use GPR. After cleaning the surface to prep it, you pull the dent out from the front using a pulling tool or device and an adhered “tab” that you attach to the panel with high-strength removable adhesive. After you’re done with the pull you may have to knock down some high spots in the same manner as you work today. But aside from some minor filling, priming and painting, in most cases, you’re done.

Another benefit of GPR (in addition to leaving most of the paint and original surface coating) is that you avoid disturbing or damaging insulation and electronics that may be on the reverse side of the panel. Learning GPR requires not only prepping the surface by cleaning it but, equally as important, making sure the temperature is right—the temperature of both the panel and the glue. Techs must also choose the correct tabs to use, and the best pulling tool for the job at hand. Fortunately, these skills and choices are easy to learn and employ.

Conventional methods utilize studs or wiggle wire and give you something to which you attach your pull tool. Studs or wires are welded on and often pull or rip holes into aluminum, leaving additional work for technicians to clean up. This method works adequately, but GPR eliminates stud welding, so the repair is far less intrusive with less post-pull work pounding, filling, priming and painting. There’s no need to spray wax or coatings inside the panel because you didn’t burn any of the OEM material away.

PDR techs and tool providers pioneered GPR techniques in the late ’90s. Since those early years, KECO has been at the forefront of improving these techniques and has now taken them to a level that allows any shop to adopt them with ease. Through proven methods of GPR, techs pull dents using the same tools for steel or aluminum with no welding and no need for separate steel and aluminum work areas. The overall result is a less intrusive way to repair dents.

KECO’s GPR also addresses the fact that body panels are no longer simple pieces of metal that serve as side and quarter panels; today, they contain wiring, electronics and insulation on the back, sensors and e-coatings on the front. Glue pull techniques and tools allow technicians to use their skills in new ways that avoid unnecessary damage making repairs faster and more efficient.

You can shop the entire assortment of KECO Body Repair Products, as well as many of the other premier brands in dent repair at kecotabs.com. To, see some products in-use with the power of GPR, KECO’s YouTube channel is updated all the time with new videos.

Contact KECO today so your shop has the tools and knowledge to enhance your profitability, improve efficiencies and provide your customers with a higher quality repair.